It is a powerful and important story with universal messages. It needs to be told. The project has been a work of passion of “hyper-local” documentary maker David Vaisbord, who now has hundreds of hours of video footage taken over the past several years of the story of Little Mountain in Vancouver. We urge readers to check out the following links and consider supporting the final stages for the making of this documentary.

For more about the project, including a film trailer, and to make an online donation, go to Indiegogo:
https://www.indiegogo.com/projects/little-mountain-film END_OF_DOCUMENT_TOKEN_TO_BE_REPLACED

The news release is copied below for convenience of readers.

END_OF_DOCUMENT_TOKEN_TO_BE_REPLACED 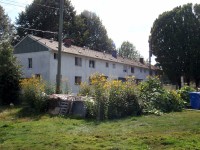 (Updated) The news that low-income tenants at Little Mountain will not be evicted is a huge relief. We hope the news is all true. But, the public must wait to learn, at what cost was the deal made? Gregor Robertson’s Mayor’s Office (rather than the City’s official media office — though we’ve found a release by the Province of BC.) today, October 25, 2012, issued a press release on his blog entitled, “Social housing to move forward at Little Mountain; tenants can remain on site.” It states that a deal has been reached to prevent the eviction of the tenants occupying the last remaining building at Little Mountain Housing (see our earlier articles here and here). Quoting from the press release:

“Mayor Gregor Robertson says it is good news that social housing at Little Mountain will go ahead, and that a deal has been reached to let the remaining tenants stay on site.

The B.C. government, the City of Vancouver and Holborn Properties have signed an agreement that will allow up to 50 social housing units to be built right away at Little Mountain, prior to the completion of the rezoning process.”

This is great news that the last remaining tenants have have averted eviction, and celebration is in order for that. But the public and media need to know more of the details before they can rest assured that the deal is a good one for the tenants and the people of Vancouver. The statements issued by the Mayor’s Office bring up several key questions. How can units be built ‘right away’ if no rezoning has taken place? The release states that “The City will subdivide the lot and expedite permits to help fast-track the social housing.” This clue suggests two scenarios, as the deal involves plans to divide the property. Either a rezoning will be required to isolate a parcel destined for 50 housing units, or they would have to be built under current zoning (RM-3A Multiple Dwelling at floor space ratio of 1.0). So here’s the catch — if a rezoning is the intent of the agreement, a Public Hearing is required. Can the Mayor’s Office make a public commitment to the outcome of a Public Hearing (even for a very worth cause)? What precedents are being set here? Have all our elected officials at City Hall been briefed of the details and did the express support for the deal before the Mayor made the announcement? Has the Mayor followed due process? Of course building under current zoning would not require a public hearing or Council approval, but current zoning limits development there to a density of 1.0 FSR. We’ve reproduced the zoning map below for reference:

Open questions: What is the story behind the scenes? Did BC Housing and Holborn artificially create a crisis using the threat of eviction, which gave them and the City of Vancouver the chance to appear like heroes END_OF_DOCUMENT_TOKEN_TO_BE_REPLACED 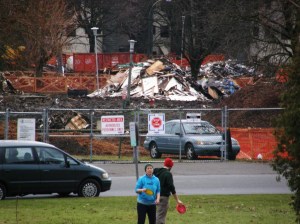 The premature destruction of this large social housing complex in Vancouver and the ongoing saga about the community and the site’s fate deserve attention now and will for some time to come. Offshore investors, egos, political influence and spin, bureaucratic bungling, mainstream media blindspots and incompetence, and more, are some of the factors determining the flow of the ongoing saga of the Little Mountain housing development. The project returns to Vancouver City Council this Wednesday (June 27, 2012) when the committee on Planning, Transportation and Environment reviews the Little Mountain Policy Statement. http://vancouver.ca/ctyclerk/cclerk/20120627/ptec20120627ag.htm

Independent documentary filmmaker and member of the Little Mountain community David Vaisbord has made it a personal project to document this story. Since he began in 2008 the project has been in continuous evolution and production. END_OF_DOCUMENT_TOKEN_TO_BE_REPLACED

Note: This article is a continuation of CityHallWatch ongoing coverage of this story. See cloud tag at right for previous coverage. Also highly recommended: littlemountainproject.com

In many respects, the Little Mountain Community Advisory Group (CAG) statement and recommendations (download PDF Little Mountain Cmnty Adv Grp, Comments, June 2012) are consistent with those of planning staff, but they differ in regard to overall density and building heights. END_OF_DOCUMENT_TOKEN_TO_BE_REPLACED

Vancouver’s Urban Design Panel meets this Wednesday on May 9. Of special note are two controversial projects, Shannon Mews (item 2) and Little Mountain (item 5) below. Interested citizens and groups are encouraged to attend. See the UDP website for a background about the UDP and procedures. http://vancouver.ca/commsvcs/planning/udp/2012/Agenda/May9.html

Video documentary David Vaisbord has prepared a video of the developer’s Open House for the controversial Little Mountain development project near Queen Elizabeth Park. The community has until February 10 to submit comments on the application. David provides a link to the form from his website:  littlemountainproject.com. More information follows:  END_OF_DOCUMENT_TOKEN_TO_BE_REPLACED

In March 2007, BC Housing announced plans for the redevelopment of the Little Mountain Housing complex. There was no need to dislocate more than 600 residents and demolish 220 affordable homes in the middle of a housing crisis because the 15-acre site will have to be redeveloped in at least three successive phases. But realtors had advised BC Housing that they would get better offers for the land if they could provide a “blank slate.” Neighbourhood supporters and Little Mountain tenants organized Community Advocates for Little Mountain (CALM) to lobby officials on behalf of the community, but to no avail. Many of the tenants were intimidated into accepting unsuitable accommodations. City Council went along with this approach because Housing Minister Rich Coleman made the sale and demolition of Little Mountain a condition for funding construction of desperately needed supportive housing on City-owned sites.

One rowhouse containing four homes was spared, and is currently occupied by tenants who refused to accept relocation. BC Housing agreed to let them remain because forcibly removing them would have generated negative publicity and raised more questions about why the province was needlessly destroying a thriving low-income community and its social capital. This rowhouse could yet be retained for its heritage value (Little Mountain was Vancouver ’s first social housing complex) and renovated to serve as offices or a day care centre, but that would reduce the number of market condos that could be built.

After the City approves a Development Framework, which could happen this spring, the developer can initiate a rezoning process, which planning staff estimate would take about 18 months. So the earliest that construction could begin is the fall of 2013. It is unlikely that any of the dislocated tenants will be able to return until 2016. When redevelopment plans were announced in 2007, they were told that they could be back in their new homes at Little Mountain by 2010.

The price that Holborn Properties (a subsidiary of a Malaysian merchant bank) agreed to pay for the land has been kept secret, but it is widely believed that they offered a lot more than other, more experienced developers on expectations that it could be redeveloped at extremely high densities with towers and multi-million-dollar penthouses overlooking beautiful Queen Elizabeth Park. END_OF_DOCUMENT_TOKEN_TO_BE_REPLACED 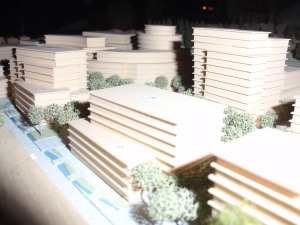 The first of two Open Houses was held at Brock Elementary School on January 26th. The meeting room was packed and the event went well past 9pm. Residents had an opportunity to review all the panels and models provided by the applicant and the city, and to provide their feedback.

The revised design revealed by the proponent now has a Gross Floor Space Ratio of 2.8 and has towers up to 14-storeys in height.  This is on the high-end of the density options provided at an earlier Open House on July 12, 2011 as reported by CityHallWatch here. A second opportunity for the community to provide feedback will present itself on Saturday, January 28, between 11am and 2pm at Brock Elementary School (4860 Main Street). For further details please read the earlier post Little Mountain housing saga continues: Open Houses Jan 26 and 28, 2012.

In a city where social housing is so precious, this story of the Little Mountain housing project is something everyone should be watching. This is an issue of great citywide importance because of the precedents this redevelopment will set. After demolition of the buildings that housed a mature community until just before the 2010 Olympics, former residents were dispersed to places far and wide. Now the wheels are turning again for the future development of the site. Two open houses are being organized by the City of Vancouver. Citizens’ groups are preparing materials to promote meaningful discussion.

A revised development concept is being presented by Holborn Properties for this site near Queen Elizabeth Park, between 33rd and 27th Avenues and Main and Ontario Streets. Below are links to various sources.