The conversion of 98 units of rental to hotel use will be reviewed at City Hall by the Development Permit Board meeting on June 22, 2015. This is the second time the DPB will be reviewing this proposal. In 2011, former Director of Planning Brent Toderian voted against the rental to hotel use conversion, along with former DP voting members David McLellan and Peter Judd. Since that time, McLellan and Judd have both retired and Toderian was let go by the City. [Update: City Staff  informed interested residents via email on June 15th around 4:30 pm that the “Development Permit Board meeting has been rescheduled to Monday June 22 at 3:00 at the Town Hall in the Main City Hall building”]

The Carmana Plaza at 1128 Alberni Street has been operating illegally for many years as a hotel — in full view of the City of Vancouver and with the full knowledge of staff. Senior planner Kevin McNaney made misleading statements to MetroNews in an article published on May 11, 2015 and claimed that the City didn’t know that the rental units were being illegally used as hotel rooms (for further details, please see: City claims ignorance on Carmana Plaza permit violation (rentals as hotel). Public correction needed? CityHallWatch, May 12, 2015).

The current voting members of the DP Board are Brian Jackson (General Manager, Planning and Development), Sadhu Johnston (Deputy City Manager) and Jerry Dobrovolny (Director of Transportation). Will the DB Board vote to approve the same rental to hotel room conversion that was rejected in 2011?

The staff report and recommendations for 1128 Alberni were not available on the City’s website as of this writing (9:45am June 15, 2015). However, we have a copy of the report that was obtained via email late on Friday afternoon: CoV DPB, staff report, 1128 Alberni, DE418950, for 15-June-2015 (People should note that this report is dated May 20. Why did City Hall postpone its public release? Also, public input was being accepted to the end of the day on May 20. How could the report be complete before all public input was received?)

Are some applicants more equal than others? The Carmana Plaza has operated illegally as a hotel for approximately 10 years. Are certain corporations permitted to break bylaws with impunity? Is preserving rental stock in the West End truly a City priority? Will the DP Board reward the applicant and approve the rental to hotel use conversion? Stay tuned.

(Preamble: CityHallWatch advocates a “zero tolerance policy” among media and the public regarding false and inaccurate statements by public officials. If such a statement is made, the official(s) should be expected to correct their errors publicly. Watch carefully. Potential cases abound.)

On this issue of the Carmana Plaza (1128 Alberni, in the West End, near the downtown core), we have copies of correspondence with senior officials — including City Manager Penny Ballem — going back about five years that now suggests a senior official yesterday made a false statement regarding a serious case. (For example, further below is a scanned letter from the Director of Licenses and Inspections in 2012, with other senior officials clearly named on the distribution list.)

What is this all about?

In a May 11 article in Metro News (“West End hotel escapes city penalties despite years without proper permit,” by Emily Jackson), a senior official claims the City didn’t know that Carmana Plaza was operating illegally as a hotel:

“But the city didn’t realize the hotel on 12 floors of the 34-storey, mixed-use building was operating under a residential permit until a property inspector visited the property last summer, the city’s assistant director of planning Kevin McNaney said Monday.”

However, in fact, the City is on record knowing about the illegal use.  For example, the January 10, 2011 minutes of the Development Permit Board (DPB) meeting cover a request by the owner (Peterson Investment Group, CEO Ben Yeung) to do exactly the same thing as this year — to have the City officially permit 98 rental apartments for hotel use (http://former.vancouver.ca/commsvcs/planning/dpboard/2011/Minutes/Jan10.html).

Are Mr. McNaney and the City as an institution feigning ignorance about the 2010/11 application? The DPB review minutes state the following:

“Should the Board turn down the application the only legal use would be rental.“
“The City has taxed the property based on hotel use since 2004.” 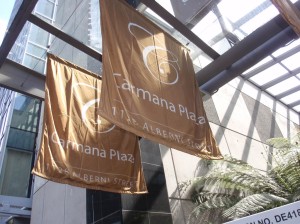 In the end, the DPB voted in January 2011 NOT TO PERMIT hotel use. All three panel members — department heads Brent Toderian, David McLellan and Peter Judd — voted against the request (incidentally, all three now longer work for the City — one fired and two retired). We know that staff were supportive of the application. But it was only the hard work of several West End residents (see for example, WEN “City planning staff recommendation to convert 96 rental units to hotel rooms described as a ‘sensitive issue‘ ”) — who noticed the application, studied the details, and took the time to submit written statements and attend the DPB meeting in person — that pressured the DPB to take this route in 2011. END_OF_DOCUMENT_TOKEN_TO_BE_REPLACED