[Updated 24-Apr-2011] The drive for tall buildings (15, to 50, 60 storeys and potentially higher in the future) raises many interesting and critical questions for Vancouver. Tall buildings are being proposed in many parts of the city. CityHallWatch encourages a balanced debate of all the factors, both pro and con, in decisions on building height (and therefore density), which will define the character of our city. As time permits, we will organize our coverage of the topics, but for now, we post items as they come up. Note two important City events, April 19 and 20, below. Note that at the April 20 meeting, the UDP voted “non-acceptance” of the proposed design at 1290 Burrard. We will report further on this. 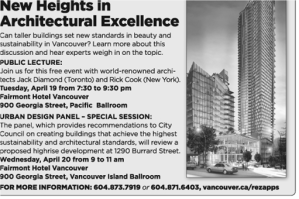 The city and UDP have organized a lecture for the following week (April 19th), with an Urban Design Panel hearing on April 20th. One of the guests is Toronto based Jack Diamond, a well known champion of tall buildings. Who will stand up for the views? For the community values?

From City website:
The City has received an application to rezone 1290 Burrard and 1281 Hornby Street from DD (Downtown) District to CD-1 (Comprehensive Development) District. The proposal is for a mixed-use development as follows:

On March 16, 2011, the WE magazine (Westender) carried a story titled “Tackling the Fear of Heights.” (Updated link 11-Dec-2021 – https://www.vancouverisawesome.com/courier-archive/news/news-tackling-the-fear-of-heights-2972585)

*********************
[Status update, 24 Jan. 2011] Potentially one of the most significant policies  this century — affecting the Vancouver skyline, mountain views, the very character of our City, and much, much more — was almost approved by City Council on Dec. 16, almost completely under the radar of most Vancouver citizens. The City’s Planning Department had quietly released its “Vancouver Views” report, dated November 29, on the City website at 4 pm on the Friday, only three business days before Council was to pass it, just before the Christmas break. Odds were seriously stacked AGAINST the public, but CityHallWatch and citizens rang alarm bells, giving Council no option but to defer the vote to Jan. 20, 2011. CityHallWatch.ca held a public forum on these topics on Jan 11. Council heard 40 speakers on this policy on Jan. 20. The majority of them were against the policy and demanding a more careful public discussion of the MANY issues involved (views, skyline, character of Vancouver, civic finances, traffic, public amenities, livability, environmental factors, seismic safety, disaster response, impacts on affordability, and much, much more). The speakers supporting the policy were mostly associated with developers standing to gain from the policy. The discussion and vote in Council is now scheduled for Feb. 1.

Also on Jan. 20 Council was to adopt staff recommendations on the Heritage Area Height Review, which proposes increases in permitted heights to allow 7 buildings 15 storeys in Chinatown and the DownTown East Side. But knowing that about 100 speakers had signed up to speak to council against this policy, the Mayor issued a last-minute “emergency” motion sending three proposals straight to public hearings, and creating a new community consultation process to last until after the next civic election. DTES civic groups criticized the last minute move.

These issues are critical ones for Vancouver and are not over yet. People are encouraged to read up, learn the issues, and get involved. The proponents of these policies have vast resources in their favor and are rushing to get the policies pushed through. But CityHallWatch believes a failure to spend the necessary time to have a proper public discussion, with independent experts weighing in, will work against the public good, and further erode trust in City Hall. There is no reason to rush such important decisions.

In the fullness of time, though, the public will be able to evaluate the actions and words of all the players. In time, there must be a “performance appraisal” of all. Our civic society must learn from this experience and become better for it.

For video and documents from the Dec 16 Council meeting, see here or our version captured on YouTube here.

City staff had just finished three open houses (Oct 23, 26, 27) on potential changes to the allowable height of buildings downtown (particularly around Thurlow and Georgia Streets), near Hornby/Drake and at the North side of Granville Bridge. The proposed policy will let buildings at certain sites go up to about 700 feet (about 70 storeys), and potentially much higher. There are implications for views, shadows, traffic, infrastructure, services, schools, and much more. Many people would like to know the comprehensive picture. Official city website on the views policy and higher buildings is here. Anyone interested in seeing Council and Director of Planning discussing the topic on January 19, 2010 (a year ago), see this Council video (jump ahead to about 1:15:00 for Councillors Louie and Woodsworth, then Director of Planning; note that Mac users may not be able to jump ahead).