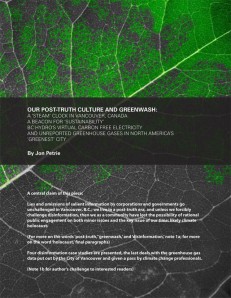 (See our update to this whole story  in “Falsus in Uno, Falsus in Omnibus — Roman legal principle: a witness who willfully falsifies on one issue is not to be trusted on any issue” (20-July-2015).

This media release below was issued June 18, 2013. CityHallWatch is facilitating Mr. Petrie in follow-up, and will report periodically on correspondence with and responses from the entities mentioned until we are confident they have provided correct facts publicly. (As of 29 Aug 2013, none of the organizations mentioned have provided any response despite repeated attempts.) Below is a copy of the original media release.

The central claim of the 25-page report is serious: “Lies and omissions of salient information by corporations and governments go unchallenged in Vancouver, B.C.; we live in a post-truth era, and unless we forcibly challenge disinformation, then we as a community have lost the possibility of rational public engagement on both minor issues and the key issue of our time: likely climate holocaust.”

The report is available for viewing online here and can be downloaded in PDF format:
http://www.scribd.com/doc/147478414/Our-Post-Truth-Culture-and-Greenwash

To mark release of his paper, Jon Petrie said, “I hope to stimulate alarm and disquiet — and a radical rethink of our direction. The Eye of the Wind turbine on Grouse Mountain is producing only 3% of the electricity they let us believe is being produced. The City of Vancouver is gaming the system with its CO2e reporting, and miseducating the world. Democratic society cannot function if disinformation circulates unchallenged.”

and that BC Hydro, Grouse, and the City respond by changing the false and misleading representations they have been making for years with essentially no criticism. We also hope that  the broader issues raised by the essay – the absence of critical thought, and the acceptance of disinformation in what he calls our “post-truth culture” – will provoke discussion, awareness of responsibilities, and change.”

View this document on Scribd

Footnotes are extensive and are an integral part of the work. In the interest of openness and the search for the truth, Petrie has offered a $400 award to the first person who can show that one of his four analyses is wrong in some important way or that the information in any one of the analyses is readily available elsewhere (see note 1b in essay). He also invites the parties referenced to respond in writing to his assertions, and to his questions indicated below.

On the next page are a set of follow-up questions from Petrie to the City of Vancouver, Grouse Mountain Resorts, etc.

CityHallWatch.ca — What will Vancouver look like in the future? Many players and interests influence civic decisions. CityHallWatch aims to balance the game by giving citizens the confidence and tools to engage City Hall effectively.

Inquiries on the report: Jon Petrie will respond to informed inquiries. See contact info in his note 1b.

FOLLOW UP to Our Post-Truth Culture and Greenwash, By Jon Petrie, June 2013

We are sending the Petrie article to Grouse Mountain Resorts, BC Hydro, the City of Vancouver, the David Suzuki Foundation, and UBC asking each a few questions. We will publish their responses and any comments they choose to make on the Petrie article. We would be happy to host a debate.

1. Petrie’s questions to the City of Vancouver re section one of the essay:

3. Petrie’s questions to BC Hydro:

4. Petrie’s question for the City of Vancouver re section four:

5. Petrie’s questions for the David Suzuki Foundation – (see note 3i):