Vancouver civic election in 2014 was on Saturday, November 15.

Our top page has coverage/analysis of the election results.

To get official voter and candidate information from the City of Vancouver, in your browser, type “Vancouver.ca/plan-your-vote/” and then click on “Vancouver Votes” and then find, “Start Planning.” Or quicker, just click here. You can choose your candidates, find voting times/locations, and download a summary.

Voters face a wide array of choices, with 119 candidates and 11 parties on the ballot. To help voters decide who to vote for, a number of groups and media outlets are releasing their recommended voting slates. As one example, Neighbourhoods for a Sustainable Vancouver (NSV), a registered third-party sponsor for this election, has announced what it calls a “strategic” slate (click here for details) aiming for change at City Hall, Park Board and School Board, based on these criteria:

Note that on April 30, 2014, the B.C. Legislature did the third reading of new legislation (Bills 20 and 21), which will be  in effect for this election, with some cosmetic changes to the rules on election campaign finance. But it wasted this opportunity to reform rules about political donations. The sky is still the limit for donations, and any corporation, union, or any entity from anywhere in the world can still donate to political parties. In addition, the Province abruptly changed its stance and suddenly decided to switch to four-year terms (from three). After 2014, the next election will be in 2018. This is effectively a 33.3% increase in power for whoever wins the election. The stakes are high.

What are the key election issues? Politicians and parties try to set the agenda by choosing issues where they think they can win votes.

This page is about running for office:
http://vancouver.ca/your-government/run-for-office.aspx

That page includes information on how to register as a voter, get work for the election (e.g., presiding election official), and even run for office.

The following positions are to be elected for a four-year term:

To examine voting results from the November 2011 election, click here.

Below is our impression of the current problems in Vancouver. Everyone must work together to transform this “cycle of despair”  and systemic corruption in Vancouver. Stay tuned for more. 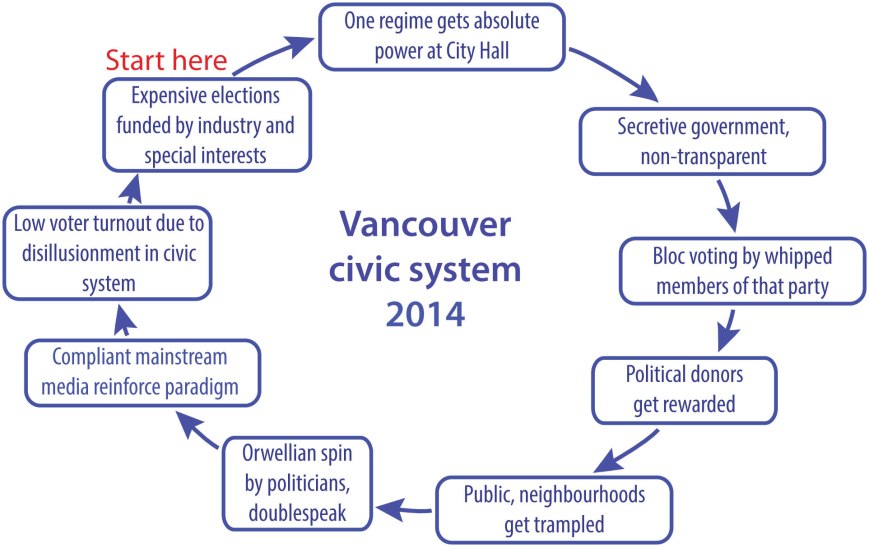