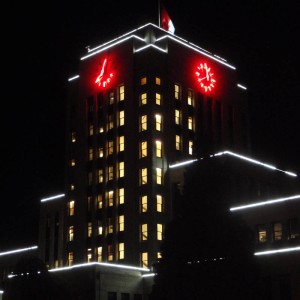 (Update 2 – After considerable Council discussion plus calls in from Citizens, the result was that time windows to sign up to speak to Council were maintained at 1 hour before a meeting. It took a lot of effort to maintain the status quo. Thanks to all who contacted Mayor/Council on this. Regarding times for reconvened Council meetings, apparently, they remain as-is at 6 pm. More will be clear when the Council minutes are posted.)

(Update 1 – There was indeed an error on the original City agenda page, and it appears to have been corrected. Now By-law No. “12577” is correctly indicated in the “Public Notice” at the top. CityHallWatch comment – even though this notice says that “Council will give consideration to amend Procedure By-law No. 12577 at the Council meeting on October 5, 2021” we believe the NOW is the time to oppose the changes being proposed. Read on, our revised post …)

Two important items are on the City Council agenda for September 21 that could have a big impact on the ability of the public to speak to Council.

Have a look at how staff are piling up so many reserve dates for July 2022 (below). What is going on here?

In October of 2020, staff had brought forward a meeting schedule that included daytime slots for reconvened Public Hearings. An amendment was passed by a thin majority on Council to ensure that reconvened Public Hearings would start at 6 pm or later (to apply to the 2021 Meeting Schedule). The minutes of the October 20, 2020 record that Councillors Boyle, Carr, Fry, Wiebe and Mayor Stewart were opposed to the amendment. Staff are now reviving their attempt by asking Council to approve a Council meeting schedule for 2022 that would include reconvened Public Hearings to be held during the daytime. For context, when a Public Hearing is packed with items and/or one item raises a lot of public concern, the meeting will not be able to finish during the originally scheduled time. The point is that people want their elected officials to hear them. Daytime meetings typically reduce the convenience for members of the public, though they may be more convenient for staff and elected officials.

And for the next issue, see Reports (1. Amendments to Procedure By-law No. 12577): Staff are seeking Council approval to change the cutoff day and time for registration when a person wishes to speak to a motion or report in Council. Currently speakers can sign up one hour before the relevant Council meeting starts, but staff are proposing this be changed to noon of the previous day.

The practice of holding Public Hearings during the day was brought in by Vision Vancouver (which was later obliterated from Council in the 2018 civic election). Reconvened Public Hearings held during the daytime can quickly exhaust the speaker’s list for important items, as many people who work during the day cannot suddenly make themselves available to speak when their name is called. The reason why Public Hearings are held in the evenings (rather than during the typical daytime working hours) is to make City Hall more accessible.

Members of the public can Request to speak on the proposed changes to the Procedure Bylaw (Council meeting rules) that include moving the registration of speakers to noon of the previous day. The cutoff for speaker registration is still 8:30 am on Tuesday, September 21. If the changes had already been in effect, then the cutoff would have been 12 noon on Monday, September 20th. The cutoff time for speakers to register does not apply to Public Hearings, as people can ask to speak even during the meeting (at least until all speakers have been heard on and the speakers list is closed).

The changes to allow for reconvened Public Hearings to start as early as 9:30 am will only be debated by Council (there will be no public speakers allowed), so the only way for concerned citizens to take action on this matter is to directly contact members of Council (by phone, e-mail, social media, or other means). A simple message that these changes are not welcome could make a difference in the Council vote on the topic.

One gets the impression that it’s the staff at City Hall, under new city manager Paul Mochrie, who are taking active steps to further erode democracy and public participation at City Hall. There was no direction from Council or public discussion on these proposed changes to the Procedure Bylaw. Here is the text of proposed changes, before and after, to the request to speak section of the Procedure Bylaw for Council and Committee meetings. Another important thing to note: changes proposed by staff would also require speakers to submit all presentations and slides by noon of the previous day. 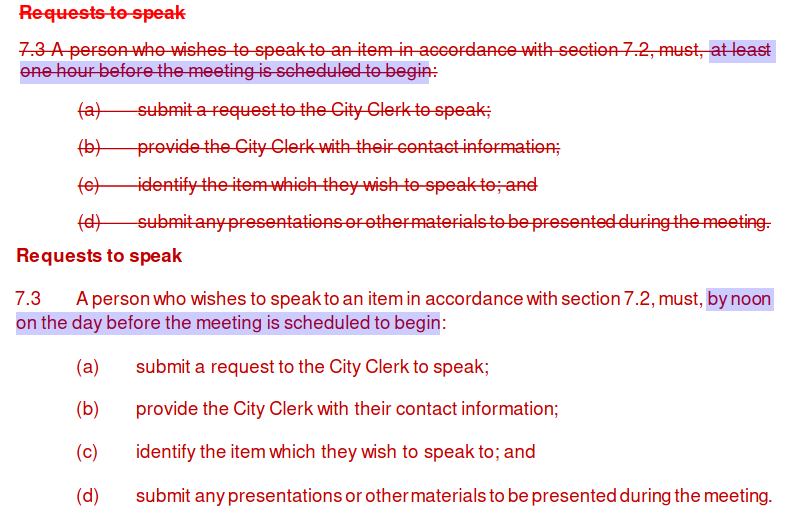 Council meeting agendas are often not posted until the Wednesday the week before the actual meeting. This week, both the Council and Committee agendas were posted on Wednesday, September 15 for September 21 and 22 meetings. This timing allows a very short period of time for information about important items to be discovered, disseminated to the public, discussed among citizens, and responses prepared. Shortening the window of time for speakers to sign up would go one step further to discourage public participation in the democratic process.

Minutes of the October 20, 2020 meeting (proposed schedule was amended so reconvened Public Hearings would start after 6 pm):
https://council.vancouver.ca/20201020/documents/regu20201020min.pdf

One thought on “Why are City staff trying to limit public access? Council to consider *daytime* public hearings and shorter time window for citizens to register to speak (Sept 21)”