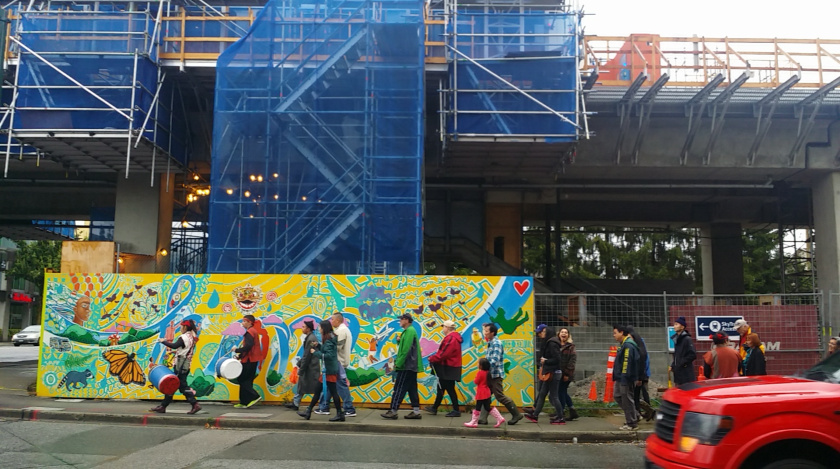 INTRO: Joyce Area Residents Association (JARA) sent this statement to Vancouver Mayor and City Council on Sept. 19, in time for the Public Hearing starting 6 pm on Tuesday, Sept 20, 2016, for a major rezoning around this Skytrain station.* (Reprinted here with permission, but CityHallWatch added some bolding for emphasis. The statement raises concerns about loss of existing affordable housing, negative impacts on the community, unaddressed concerns about transportation/transit, and an unsatisfactory consultation process — asking Council to reject this rezoning and reconsider these key issues. CityHallWatch has added links and references at bottom.)

In response to the “REZONING: Joyce-Collingwood Station Precinct Plan and Related Rezonings”, the Joyce Area Residents Association (JARA) would like to offer our comments in opposition to the proposed rezonings in our neighbourhood.

You may recall a group of passionate community members, from youth to seniors, who came down to City Hall to offer comments on rushed development in our community in June this year. Rapid growth inherently conflicts with Vancouver’s goal to become the greenest city. We urge City Council to carefully consider the following before making a decision about the proposed mass rezoning.

The high renter population in the neighbourhood must be considered. As indicated in the plan, 46 percent of 6,300 home dwellings are rented by individuals and families. Many have chosen to stay as renting has always been a more affordable option. However, with the current state of growing unaffordability in the city, unprotected and displaced renters will be left with no other options for housing. Many renters are currently spending somewhere between 30 to 50 per cent of their income on rent. As a result, new development does not guarantee that current renters will be able to afford the units. There is an urgent need for more non-market rentals, especially in a neighbourhood with such high percentages of low-income, immigrant families and seniors.

The City of Vancouver has already found that Renfrew-Collingwood area has a higher representation of low-income and immigrant residents compared to the city-wide average. In addition, the neighbourhood is also home to one of the highest proportions of seniors.

As you may recall, JARA conducted an extensive neighbourhood survey where we knocked on the doors of over 100 homes in the affected rezoning areas. These are not just families that can simply pick up and go. They have built roots and community in our neighbourhood. Many have told us that they cannot afford to stay in the neighbourhood without renters or extended family. Many have also said that they are unsure about where they could find other housing even after they’ve searched for housing elsewhere in Greater Vancouver. A great number of homes are multi-generational and their current dwelling is able to accommodate low-income families that want to live together.

The City of Vancouver insists that density is necessary because thousands are expected to flock to our neighbourhood. While our neighbourhood has always been a chosen area for newcomers and non-English speakers from a wide variety of backgrounds to settle, approving the rezonings may jeopardize that. Townhomes and apartments will not necessarily be able to house as many as the Single Family Homes for affordable rates.

JARA supports transit-oriented development that is equitable for long-term, current and new residents. We ask City Council to make a point of prioritizing affordable housing for low-income, newcomer families, youth and seniors in this community as opposed to adding it as a potential afterthought. Plans say there is potential for more affordable housing. What is the timeline? How long will the most vulnerable in our community have to wait?

While the City of Vancouver cites the 2004 Community Vision for the neighbourhood, it is clear that recommendations in the document are being ignored. Planners are veering from more collaborative and democratic engagement and consultation methods to more cherry-picking tactics. This is clear in the cryptic documents attached to this agenda item and the staff’s refusal to conduct household surveys in the affected areas and intensive months long community workshops as done for the Community Vision in 2003 and 2004.

At the very least, homeowners should be given an objective explanation of how these rezonings will impact them. There is a great deal of unrest and confusion among homeowners that intend to stay in the neighbourhood. City Council should provide unbiased staff to consult with homeowners in their mother tongues as 73% of our neighbourhood is ESL. Homeowners are being told they are able to stay while they are getting pressured by developers and real estate agents to sell. Homeowners are also being pushed out due to the threat of living in a highly congested construction zone for many years. Further, our small businesses are already feeling the crunch. As you know, the small businesses around the station are primarily immigrant owned. The majority are not in favour of the re-zonings and fear that it could mean their long-term businesses are at stake due to increased rents and business taxes. City Councillors mentioned protection of small businesses is a concern on June 28, 2016 at City Hall. What are the safeguards in place to protect these businesses as bigger chains pop up in the area?

Further, since the new General Manager of Planning, Urban Design and Sustainability, Gil Kelley is just easing into his new position, JARA urges City Council to put a pause on the rezonings to hear input from Mr. Kelley. With his new responsibilities having a strong emphasis on housing affordability, it is important to hear more about his findings in a Vancouver context.

Once again, we urge City Council to deny the proposed rezonings of single family homes in the Joyce Station Precinct Plan, and come up with solutions that add density without destroying perfectly good homes and displacing families.

Members and supporters of the Joyce Area Residents’ Association (JARA)

Some related links, selected by CityHallWatch

Public Hearing starting 6 pm on Tuesday, September 20, 2016.
Agenda and documents, including correspondence received, and instructions for people to write or speak to Council.
http://council.vancouver.ca/20160920/phea20160920ag.htm

The Joyce-Collingwood Station Precinct rezoning: On the consultation process.
June 7, 2016. “A couple of thoughts on this rezoning process.”
https://voony.wordpress.com/2016/06/07/the-joyce-collingwood-station-precinct-rezoning-on-the-consultation-process/.
CHW note — Voony is an anonymous blogger who looks in detail at various transit and development issues in the region. Voony reveals some interesting insights and revelations written by Voony before City Council approved the precinct policy in June 2016…. Selected excerpts: In 2014, the city decided “the neighborood didn’t developed as expected: let’s do something about it”. The city never admitted that the whole process was triggered by Westbank wanting to build a 30+ storey building at 5050 Joyce street [4]. (Instead, it rationalized it on the TransLink’s planned upgrade of the Joyce-Collingwood Skytrain Station [5] , as an opportunity to review its zoning policy)…”don’t consider the Westbank application for spot rezoning, but don’t reject it outright either – rather contextualize it in an community plan.” … It is possible the people at Jara was not aware of the early stage of the consultation process: The city didn’t seem to have put lot of effort at reaching the neighborhood [1], something Jara has been kind to correct. …. The neighborhood has accepted very significant densification. The Wall Centre at Central park, has generated ~$12M in CAC + DCC, this in addition of the CNH annex and Mosaic space [2], from which apparently not a single cent has yet been spent in the neighborhood [9]… So it is certainly possible the neighborhood feels short changed on the topic. Explaining that the neighborly community centers, such as Killarney, a 30 minute walk away, can serve Joyce Collingwood is probably unsatisfactory…. The plan is scheduled to go beyond council on June 14 or 15th, 2016 – In the meantime, properties concerned by the rezoning have started to appear on MLS: the asking price is around 100% above assessed price (vs 20-30% for other properties in the neighborhood), all this “land lift” is something which will not be availbale for CAC (a direct consequence of the opacity of the city’s CAC policy, which is object of backroom deal)

Coalition of Vancouver Neighbourhoods letter to City Council, June 13, 2016
http://coalitionvan.org/wp-content/uploads/2016/06/CVN-Letter-to-Council-Joyce-Area-Rezoning-June-14-2016-V3a.pdf.
Excerpts – ….
3. The Joyce Plan is not grounded on facts about the current density of the existing community or the needs and desires of the area. It is a plan for gentrification and will increase unaffordability
4. The towers around the station appear to have no FSR limits or limits to number of storeys and could potentially set a dangerous precedent for the City. The Westbank proposal currently is for 14.33 FSR and 29-storeys, but if approved, could result in over 35-storeys with lower floor heights vs. 10’2″ floor height in the current application. Having no FSR limits in the plan allows for excessively dense development that would act like a wall across the community.
5. The proposed rezoning will result in a loss of existing rentals that will displace both existing owners, renters and businesses.
6. The city’s own consultants have confirmed there is enough existing zoned capacity to meet growth for the next 20 to 30 years without this rezoning.

Some notes by CityHallWatch from our Council preview for week of September 19.
The [Joyce-Collingwood Station Precinct Plan and Related Rezonings, on the Public Hearing agenda] is of crucial importance for many reasons. It is a final stage of a process – to approve rezonings of several blocks around this Skytrain station. It is an example of “transit-oriented development” with the stage set years ago and the outcomes probably predictable because of the Metro Vancouver region’s philosophy of building towers around transit stations. But the low-income, working-class, immigrant and largely English as a second language (ESL) community heard nearly nothing about concrete plans until suddenly developer Westbank proposed a 35-storey tower here, and then the City suddenly announced this “precinct” planning policy in November 2015. After newly-formed Joyce Area Residents Association organized quickly, the City gave more presentations, but the same basic plan moved ahead. Citizens had a chance to address Council directly during two daytime Council meetings (difficult for working people to attend) on June 14 and 15, 2016, and the Council approved the policy at a daytime meeting on June 28. This public hearing is the next step — to rezone the precinct to match the policy. Interestingly, of the letters of support posted online so far (Sept 19), one is from Colliers International’s vice president of investment, who claims as clients major developers (Wall Financial, Concord Pacific, Bosa, Anthem, Wesgroup, Intracorp, etc.), but does not mention his employer in the letter to Council. Another support letter is from a “YIMBY” lobby group that is organizing on social media to get people to support all new construction, everywhere. Local residents and businesses rightly fear speculation (already happening), evictions, loss of local character and local businesses, threat to seniors’ housing security, and dramatic change and loss of the community they knew. All due to the doctrine of “transit-oriented development.” Meanwhile, City Hall approved the policy in June without imposing limits on density and the number of storeys. That is like a license to print money. A number of towers are proposed, potentially up to 300 feet in height. To read JARA’s views, see “Strong Opposition: Joyce Residents Take City Hall June 15” and “City Plans for Joyce Collingwood Are Cause for Concern.”

Note that two stations on the Skytrain line from Joyce-Collingwood is Metrotown Station, which has seen many heated protests and occupations of rental buildings to protest “demovictions” of older rental housing to make way for expensive new towers.