The composition of Vancouver City Council would be quite different if Proportional Representation was used to elect Councillors. Based on the total votes cast in the 2014 election, no party would have a clear majority on Council.

There are a number of variants of electoral systems that are considered to be “Proportional Representation”; here’s a link to a primer on list systems, mixed systems and ranked choice voting (Single Transferable Voting).

Many changes could be considered to reform the electoral system in Vancouver. Meaningful finance reform would be essential to get big money out of civic politics. Over $6.5 million was spent during the course of the 2014 Vancouver election, with the two leading parties spending around 90% of that total.

Vancouver had a ward system prior to 1936. Two “aldermen” were elected in each of the five wards (1886-1904). The Vancouver Charter allows City Council to enact a new bylaw and change the electoral system to ward system at a Public Hearing.

Many Canadian cities use a ward system. Toronto has a total of 44 wards and a population 2,615,060 (2011 Census vs. 603,502 in Vancouver). This works out to an average ward size of 59,433 (in comparison Vancouver has 1 Councillor per 60,350 residents). However, there are significant differences in Toronto. Political parties are banned from participating in local elections and all candidates are independents. There are strict donation limits and spending limits for candidates. Union and corporate donations are banned in council races. The ward system is a complex topic that we hope to revisit in more detail in the near future.

A talk on Proportional Representation will be held at 7:45pm on Wednesday, November 18th with guest Dave Meslin at the Coal Harbour Community Center, at 480 Broughton Street in Vancouver. Further details can be found on the 123Vancouver event page: http://on.fb.me/1MTCf1s. CityHallWatch has no formal connection with that organization. Just spreading the word.

Update: The graph below illustrates how Vancouver’s current at-large system works. The top 10 Council candidates were elected. The threshold to be elected was 56,831 votes in 2014. The top independent candidate received just 8,197 votes.

The above chart illustrates the total votes for all Councillor candidates who received more than 8,000 votes. The chart below shows the vote breakdown for all 49 candidates who ran for City Council:

The following chart shows the composition of the entire Vancouver City Council under a Proportional Representation system (all Councillors and the Mayor):

Below is a chart that shows the composition of the full Vancouver City Council (2014 election, all Councillors and the Mayor):

Here’s a side by side comparison between the two systems (current at-large and Proportional Representation):

The City of Vancouver has 7 Directors on Metro Vancouver Board. The directors were appointed on December 8, 2014 by a majority vote of City Council: 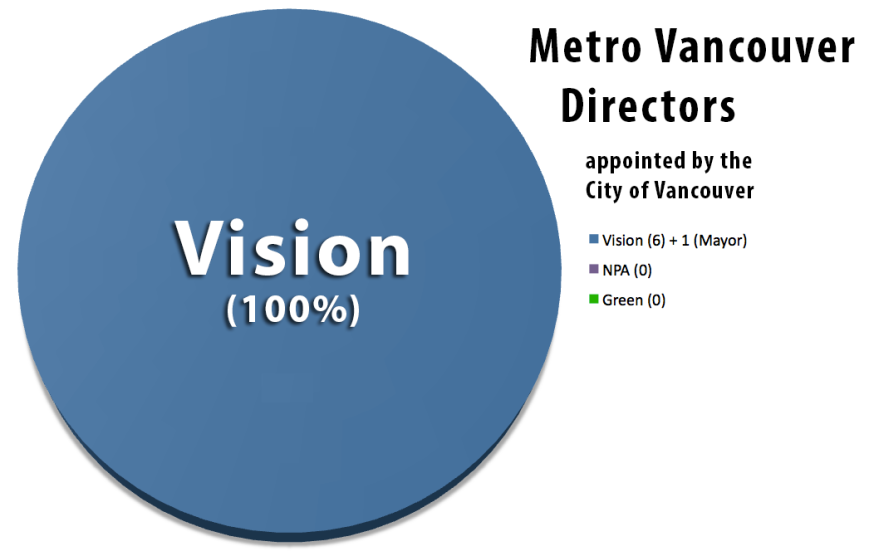 The Councillor who topped the polls in 2014 is from the Green Party of Vancouver, while the next three most popular Councillors are from the NPA. In other words, none of the “top 4 finishing” Councillors were appointed to serve on the Metro Vancouver Board as Directors (note: another body to look at is the Capital Regional District).