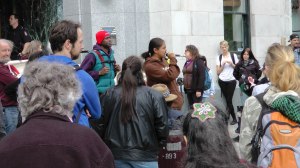 CityHallWatch has obtained this news release from the “DTES Not for Developers Coalition” on a march to block condos from the 100-block East Hastings and defend Downtown Eastside low-income communities against gentrification and displacement. We copy it below for public information.

The developer who wants to build condos on the 100-block of E Hastings has recently announced a plan to start his sales. This project is part of a siege of the DTES by new condo projects that are driving up land prices and rents in hotels. Meanwhile, cops are clearing the streets and boutique shops are pushing out low-income serving stores and services.

The sales drive (whether imagined or a real threat) is backed by BC Housing dollars. A recent Province news article revealed that BC Housing bailed the Sequel 138 condos from the brink of foreclosure in the early summer with a low-interest $3.75M loan and promises $20M more to help with construction. Are Sequel 138 to be BC Housing’s first condos? (See more info below)

On Tuesday December 11 we will rally and march to demand social housing not expensive condos! People not profit! Stop gentrification! Community not displacement!

Organized by DTES Not for Developers Coalition
http://dtesnotfordevelopers.wordpress.com

BC HOUSING BAILS OUT CONDO DEVELOPER WHILE HOMELESSNESS CONTINUES

Vancouver, Unceded Coast Salish Territory- Residents and organizations in the Downtown Eastside are outraged and alarmed at the recent news that BC Housing gave Sequel 138 condo developer Marc Williams a $3.75 million loan (at 1.29 percent interest) for pre-construction costs and may provide around $20 million to fund construction for condos at the Pantages site. According to news reports that interest rate is well below the going bank rate of 4 to 8 percent.

“About 850 people in the Downtown Eastside are homeless and another 3500 are surviving in totally inadequate hotel rooms,” said Beatrice Starr of the DTES Power of Women Group. “BC Housing’s mandate is to develop, manage and administer subsidized housing, yet it decides to subsidize a condo developer for a project that will provide only 9 units of welfare rate social housing, but 79 condos,” added Starr. “We have an urgent and critical need for at least 10,000 units of social housing annually in this province, yet BC Housing is instead offering corporate welfare and promoting the gentrification of the Downtown Eastside.”

“The BC Housing loan-subsidy saved Pantages developer Marc Williams from foreclosure and helped him meet the city order to clean up the demolition site that we demanded for over a year,” said Rick Alexander of Vancouver Area Network of Drug Users (VANDU). “I live in the Brandiz hotel next to the Patanges site. Minister Coleman’s bailout of these condos could displace me and over 500 more low-income people like me who live in privately owned SRO hotels on this block. We could get renovicted because of gentrification. We want Coleman and BC Housing to do their job; end homelessness, don’t make it worse.”

Over the past year, an active campaign against condos on the Pantages sites has, thus far, delayed the Sequel 138 development. Over 40 organizations, housing providers, artists, and social workers have joined 2200 DTES residents in signing a Community Resolution opposing condos at the old Pantages Theatre site, stating, “We would not want to be complicit in a project that will further displace, impoverish, and police residents of the Downtown Eastside and make people feel more unwelcome in their own neighbourhood.”

Downtown Eastside residents are demanding a moratorium on all condo development in the Downtown Eastside until no one is homeless on the streets, in substandard SROs, or on shelter mats. They are also calling on Marc Williams to sell the Pantages parcel to the City at the 2010 assessed value and for the City to buy the site and work with BC Housing to develop it as 100% resident controlled social housing with low-income community space on the ground floor.

Mona Woodward, Executive Director of Aboriginal Front Door Society, is concerned about the impact of condos on the vital services in the 100-block for the low-income Aboriginal community; “The 100-block is near important services like AFD which represents off-reserve Aboriginal people. For us, the fight against gentrification is also against colonialism.”

Recent news suggests that Marc Williams will again be trying to ramp up his marketing strategy. The Downtown Eastside Not For Developers Coalition has called for a demonstration against the condo project and for 100% social housing, Tuesday December 11th at 2 pm at the Pantages site, 138 E. Hastings.